Home » Blog » Why We Should Be Teaching Students Economic Literacy

Why We Should Be Teaching Students Economic Literacy 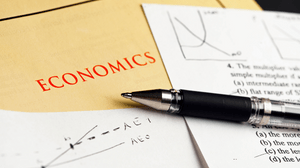 When 17-year-old Jerry Marnell thought about heading off to college, economics seemed like an enticing major to study. Between self-starting his own production company and serving as president of a local club, he knew basic business tenets were vital to success and he was interested in learning more about the subject.

But like for so many young people across the country, Jerry’s high school in California’s Monterey Bay area did not offer economic classes. He had no way of knowing for certain if economics was something he’d like to pursue, or how economic principles touch every facet of our lives—from the decisions made by individuals and companies to the performance of regional, national, and global economies.

As students return to class this back-to-school season, many parents may think their own teenagers will be taking an economics course, given the topic’s importance. For the last several years, however, only half of the U.S.—a stark 50 percent of states—require that high schools even offer an economics class as part of the curriculum, according to the Council for Economic Education. Meanwhile, 27 states mandate that personal finance courses be offered – a number that has nearly doubled since 2011. Unfortunately, economic literacy has taken a back seat when it comes to young Americans because many policy makers confuse the discipline of economics with financial literacy.

Oftentimes, the terms “finance” and “economics” are used interchangeably despite being very distinct disciplines.  Finance relates to the techniques and tools for managing money, while economics focuses on the much bigger picture of decision-making, scarcity, and allocation of resources.

So, while financial lessons deal with money’s organization and the related financial systems and instruments, economics provides an individual with the intellectual tools to guide decisions related to the use of their money.

So why is economic education so important? It helps individuals better grasp the potential unintended consequences of public policy decisions. Over the past year, we’ve seen how government spending in the form of Covid-19 individual stimulus checks helped spur a dramatic increase in inflation—a classic supply-and-demand outcome predicted by those who’ve studied economics. And those students with an economic education might view the Biden Administration’s new student debt cancellation plan with caution; even administration-aligned economists fret about the plan’s potential to add to our nation’s current inflationary woes. A fundamental principle of economics is that choices impose costs, or as Nobel Laurate economist Milton Friedman so famously said, “there is no free lunch.” With an economic education, students will be better prepared to weigh the costs and benefits of public policy decisions as they enter adulthood and take on leadership roles through American society.

That’s why organizations like the Foundation for Teaching Economics (FTE) are essential. Stepping in to fill the void left by secondary education in the U.S., FTE works to introduce high school students to an economic way of thinking about national and international issues, while also helping current economics teachers become more effective educators on the subject. FTE programs—hosted virtually and in-person on college campuses across the country—integrate economic lessons with leadership development exercises, contributing to a new generation of Americans prepared to implement economic reasoning when making important personal and voting decisions. Since 1991, more than 21,000 high school teachers and more than 14,000 high school students have participated in FTE programs.

Jerry is one of these students. “It’s helped me understand the way the world works,” he says of FTE. Seeking economic education opportunities outside of his school, Jerry attended FTE’s Economic for Leaders program this summer in Santa Barbara and is looking forward to applying what he’s learned to his current and future endeavors.

At a time when the U.S. economy veers towards a possible recession, it is critical that the next generation understands how core economic principles will impact the rest of their lives. The American educational system simply must prioritize economic education, if we are to prepare young people for the future. With greater access to economic literacy, America’s next generation will become better citizens for years to come.

ABOUT FTE Established in 1975, the Foundation for Teaching Economics’ mission is to introduce young individuals to an economic way of thinking about national and international issues, and to promote excellence in economic education by helping teachers of…

FTE is known nationally for its emphasis on active learning and the engaging activities and lessons used to teach economics. This starts with selecting the best economic professors from across the U.S. This week we are putting the spotlight on Dr. Jamie Wagner.…

My name is John Kessler and I am a Senior Lecturer in the Department of Economics and Finance at Purdue University Fort Wayne (PFW). I am also the Director of the Center for Economic Education at PFW. I get to teach introductory economics and personal finance…
See more news »