The national debt is growing by more than a trillion dollars per year. But the process by which the debt grows and the magnitude of that growth is abstract and elusive. This lesson introduces students to the national debt, the decision-makers, and the process by which debt is incurred. It also provides the historical context so students can make sense of the national debt scenario today. Through a fun Kahoot! competition, this lesson activity exposes what students think they know about the U.S. National Debt while debunking some common myths and misunderstandings. Whether used to introduce the lesson or teach concepts throughout the lesson, this game-show-style activity will keep all students engaged!

Students will be able to:

Students will understand that productive resources are limited. Therefore, people cannot have all the goods and services they want; as a result, they must choose some things and give up others.

Students will understand that there is an economic role for government to play in a market economy whenever the benefits of a government policy outweigh its costs. Governments often provide for national defense, address environmental concerns, define and protect property rights, and attempt to make markets more competitive. Most government policies also redistribute income.

Use the 10 Myth Buster Questions in the Kahoot game to explore what students know or think they know about the national debt.

What is the Federal Debt, and Why Is It Important?

The Federal debt the United States government holds is important for interest rates, investment decisions, and economic growth. The amount of debt held by the public today stands at double the amount held in 1960. Because of the potential economic implications of the national debt, it is important to understand what it is, how it is financed, what drives changes in the national debt over time, and where the national debt is projected to go.

Why does the government spend so much money each year?

Some Economists like to refer to the federal government as a large insurance company with a military.[1]

In addition to this function, the United States government spends a significant amount on defense.

Government expenditures fall into two categories of either mandatory spending or discretionary spending.

While the focus of this unit is on the Federal debt and deficit, it is instructive to include an overview of the Federal Budget process, eventual expenditures and revenues, and the resulting debt or surplus for a given fiscal year. The process includes these key steps:

As was noted earlier, in most years of our recent history, government revenues have not been large enough to pay for all of the government expenses, and we have run a deficit. When this happens, it is up to the Treasury (by law) to borrow enough money to pay for the deficit. The Treasury issues and sells Bonds to raise the needed revenues. 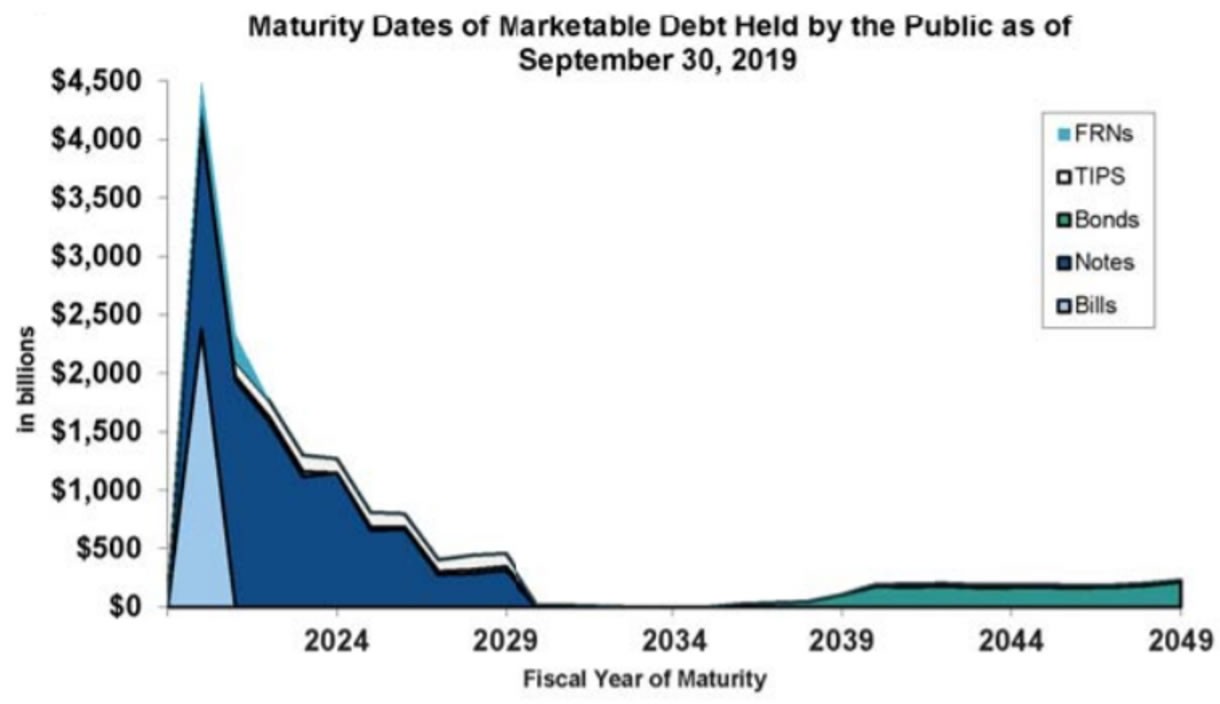 This unit will focus primarily on the debt and deficit from 1962 through 2019. This period is emphasized because we have detailed breakdowns of government expenditures and government receipts. However, in order to get a longer-run view of the expenditures and receipts in the United States, figure 4 is included to show the federal expenditures as a share of GDP from 1792 until 2008. The historical fiscal situation is taken from Miron, 2016.

Figure 4: Historical Federal Expenditures as a Share of GDP

Figure 5 depicts federal revenues over this time period as well.

Figure 5: Historical Government Receipts as a Share of GDP 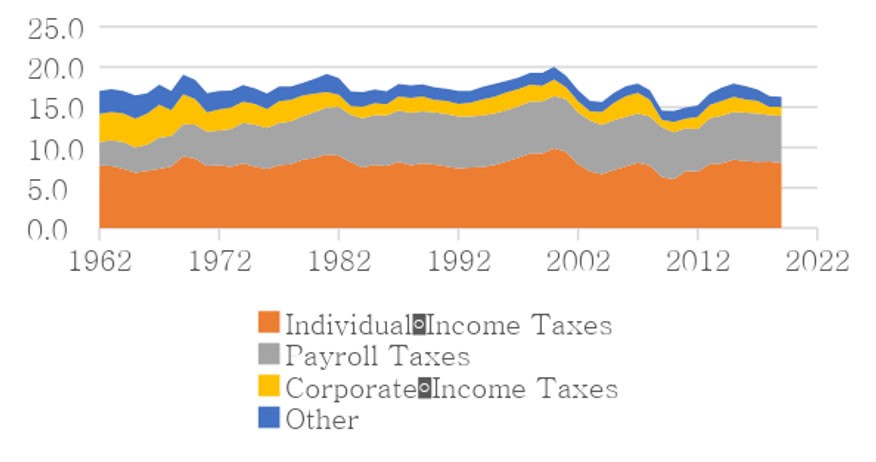 Figure 7 shows the historical government debt as a share of GDP.

Figure 8 depicts federal government expenditures as a share of GDP 1962-2019.

Figure 8: Outlays, Revenues and the Budget Balance as a Percentage of GDP 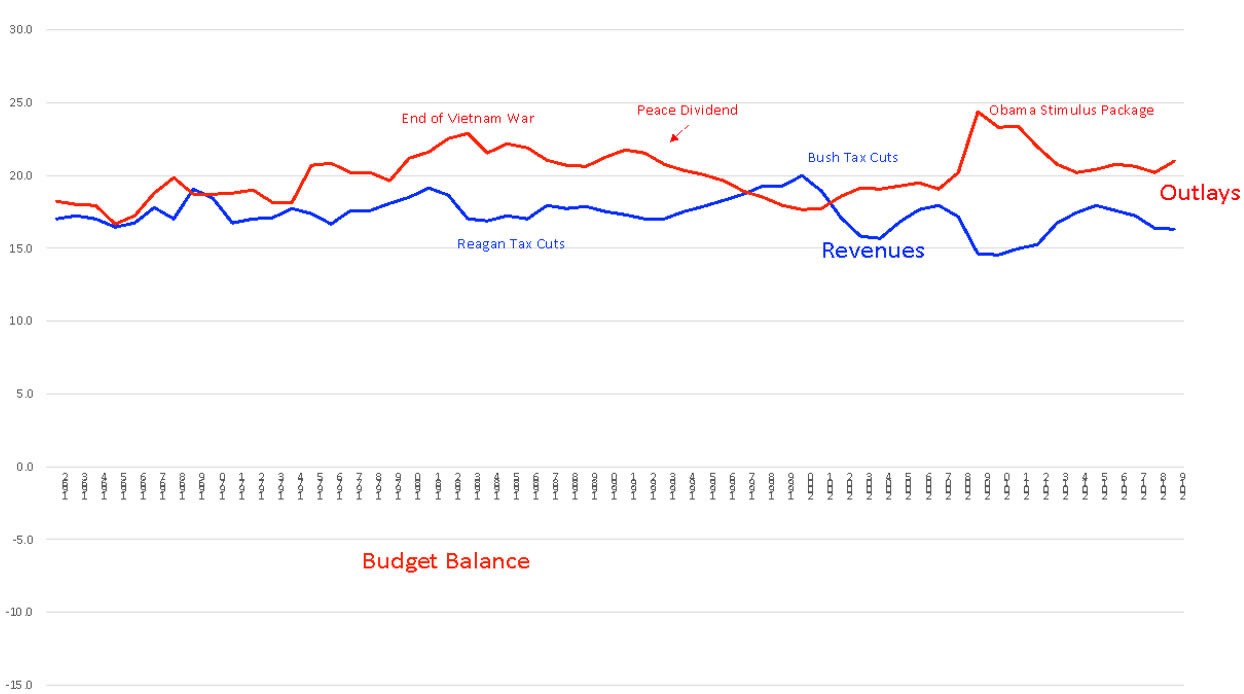 Debt held by the public.

At the end of 2019, the total debt of the U.S. government was $22.7 trillion or 104% of GDP. However, some of the government debt is held by other government agencies. The total amount of intragovernmental borrowing is $5.9 trillion. We typically do not count the amount of money the government borrows from itself, so a more meaningful measure is debt held by the public.

In response to the coronavirus pandemic, the federal government passed several bills to try to address the health-related issues associated with the pandemic as well as the pandemic’s effect on the economy. The passage of bills to address the pandemic began on March 6th and continues as of the writing of this unit. Today these measures have totaled over $2 Trillion. 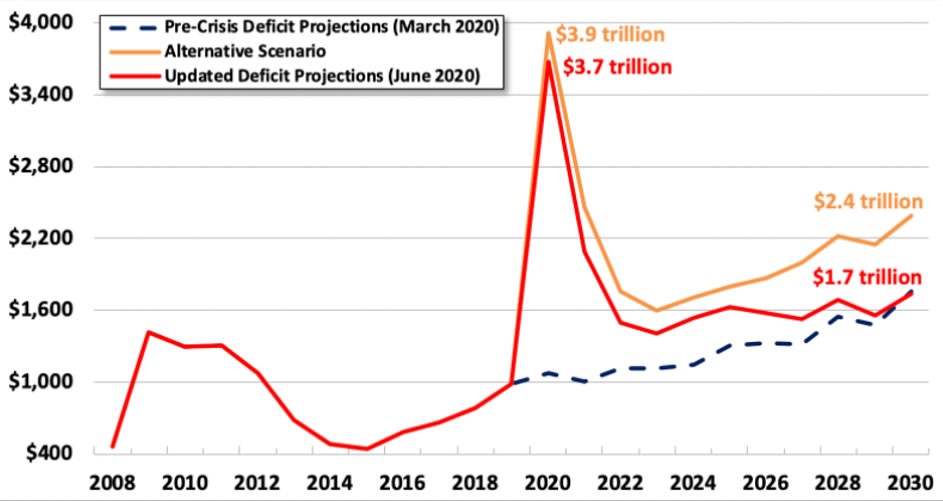 Figure 11: Projected Impact of COVID-19 on the Federal Debt 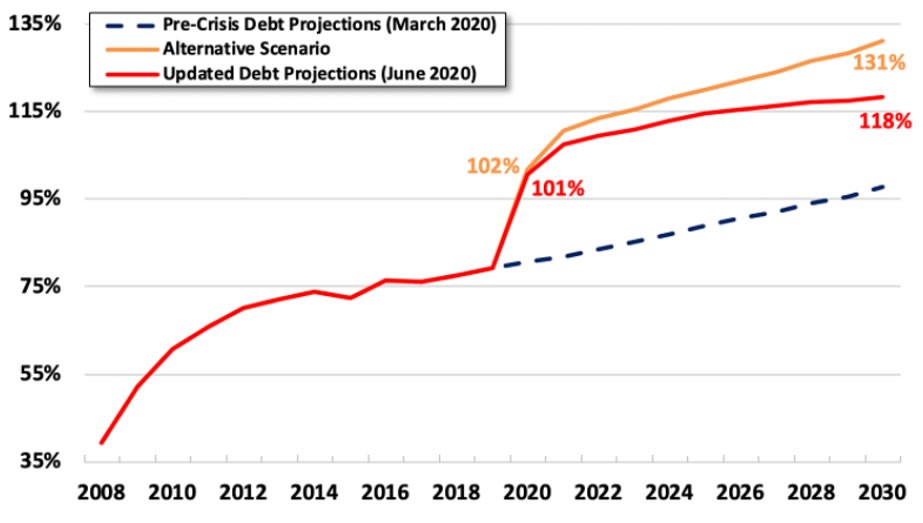 Looking to the future

Now that we have seen what the historical picture of the debt, deficits, mandatory spending, discretionary spending, and revenues look like, let’s look at projected spending levels and deficits for 2020—2030. Figure 16 shows that:

There are several reasons to have concerns about the current and projected path of government spending and revenues and the corresponding additional debt with these deficits.

The amount the government borrows each year may impact credit markets, which may slow economic growth.

[1] It is not clear where the quote originated, but it can be traced back to a comment made by Peter Fisher in 2002 when he served as undersecretary of the United Sates Treasury. (https://economistsview.typepad.com/economistsview/2013/01/who-first-said-the-us-is-an-insurance-company-with-an-army.html).