Popular media and rhetoric often assert that international trade results in the exploitation of workers in developing countries for the unfair benefit of American consumers.  Low wages, women and children working long hours, or sub-standard and dangerous working conditions are offered as evidence of the evils of foreign investment and growth of the export trade in developing countries.  Closer examination reveals that reality and rhetoric are at odds.  Understanding the nature and causes of productivity allows students to put in perspective the role of commonly called “sweatshop” labor in import-export trade.

Standard 1: Students will understand that: Productive resources are limited.  Therefore, people cannot have all the goods and services they want; as a result they must choose some things and give up others.

Standard 4: Students will understand that: People respond predictably to positive and negative incentives.

Standard 15: Students will understand that: Investment in factories, machinery, new technology, and the health, education, and training of people can raise future standards of living.

Voluntary Exchange and Productivity are the guiding principles of labor markets.

Keeping in mind very real concerns about the availability and reliability of data, and the low productivity characteristic of poor nations, it is still instructive to address the primary questions and arguments offered by those concerned with wages and working conditions in foreign industries that export to U.S. consumers. 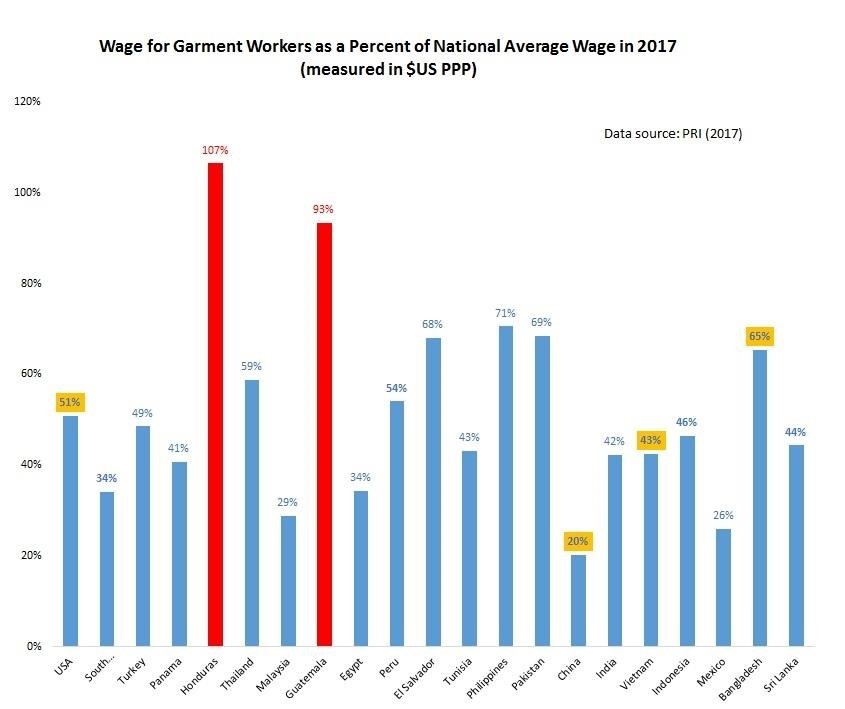 In developed counties, apparel industry jobs are low-skill, low-wage employment.  By contrast, the combination of little technology, little human capital development and poor infrastructure causes the overall level of productivity to be lower in a developing nation like Vietnam, and makes working in a sneaker factory a good job.

In truth the work does look tough, and the conditions grim, if we compare Vietnamese factories with what we have back home. But that´s not the comparison these workers make. They compare the work at Nike with the way they lived before, or the way their parents or neighbors still work. And the facts are revealing. The average pay at a Nike factory close to Ho Chi Minh is $54 a month, almost three times the minimum wage for a state-owned enterprise.

Ten years ago, when Nike was established in Vietnam, the workers had to walk to the factories, often for many miles. After three years on Nike wages, they could afford bicycles. Another three years later, they could afford scooters, so they all take the scooters to work (and if you go there, beware; they haven´t really decided on which side of the road to drive). Today, the first workers can afford to buy a car.”

Conclusion:  It would be ridiculous to assert (and no reasonable voices do) that workers in Indonesia or Guatemala or Vietnam are as well off as Americans.  Their quality of life is substantially inferior to that of low-wage, low-skill American workers and even to that of most Americans living on incomes below our designated poverty line.  However, it is clearly the overall poverty of these nations, not sweatshop employment, that is responsible for their citizens’ plight.  Indeed, it is defensible to argue that sweatshops actually improve living standards in poor nations.  A country that doesn’t produce much cannot offer its people much, regardless of what workers are paid.

2.  Are foreign workers in export industries being exploited?

Labor costs in other countries are converted to U.S. dollars at the market exchange rate.

3.  How can we, in good conscience, purchase products made in factories with unsafe working conditions, or in factories that employ children and force people to work incredibly long hours?

4.  If sweatshops aren’t the problem, what is?

Korea and Taiwan started out selling sneakers and plastic toys to the United States, just as Indonesia and Guatemala do today.  The argument could have been made that these nations were being “exploited,” just as the argument is made about poor nations today.  But over time, Korea and Taiwan became richer as the income from export industries allowed them to invest in human and physical capital.  Eventually, they shifted to producing electronics, machinery, and automobiles.  Wages rose and standard of living has flourished.  Both nations went from being among the poorest of the poor to rankings in the top 10 in a mere 35 years because they had governments that protected people’s rights to take advantage of economic opportunities.

As we look at nations today, the story hasn’t changed.  Those mired in poverty are held back by corrupt governments, weak property rights, and restrictive economic policies.  Nations experiencing growth and change have, on the other hand, seen through the myth that “evil foreign capitalists seek to exploit impoverished workers” and understand that some paths to development just might run through sweatshops.

Standing Up for Sweatshops ?!?!